Tilly was diagnosed with epilepsy back in January 2016 after a long weeks stay on the Starfish Ward at QA hospital in Portsmouth. After a disastrous trial of carbemazapine, when Tilly reacted terribly to a very low dose and could barely sit, let alone stand or walk, she was put onto a drug called Keppra. After ten months of very little change, she started to go downhill, her absences were longer and her behaviour got worse. She started on epilim alongside the keppra.
It didn’t work.
Things got worse. EEGs showed constant seizure activity and that at night, she was not asleep, she was seizing all night instead. I had always loved watching her sleep, it was a terrible blow to realise that she wasn’t safe and happy in her dreams like I had so hoped. Six weeks of steroids commenced.
They did not work.
She was hungry and angry hangry all of the time and pretty unbearable to be around. So, she was started on clobazam, even more drugs poured into her tiny body.
They did not work.
She was, to put it simply, high as a kite, and more spaced than ever. Another emergency appointment with her neurology team and I took her off of the clobazam immediately and we agreed to wean Tilly off of the keppra.

The change has been incredible. Tilly has said her first sounds in context. Buh for bubbles. Buh for ball. Tilly is starting to understand what I’m saying to her. Mentioning the swings or icecream at bedtime last night caused happy squeaks and leg kicks.

Today was Tilly’s first day keppra free for 19 months. The relief and the guilt is utterly intertwined.
Relief that she’s come down from huge amounts of epilepsy meds to just one without having a massive seizure and hospital admittance. It is a fine line and I am terrified that I’ll push her over it. But the improvement to her quality of life and mood, for now, is worth the risk. I found her cackling her head off this afternoon after getting underneath her bed. I can tell you that she was NOT aware that there was a space under her bed before now. It’s quite exciting how much she’s noticing and delighting in.

Guilt because I’ve been drugging my child up to the eyeballs for the last year and a half and as it turned out, they were making her much, much worse.

There is no current future plan. Her team are at a loss and her appointment with the consultant at the next hospital isn’t until October now. I am going to ring her epilepsy nurse on Monday to discuss alternative therapies for her.
Epilepsy is an awful condition but I am determined to find the right balance for my girl. 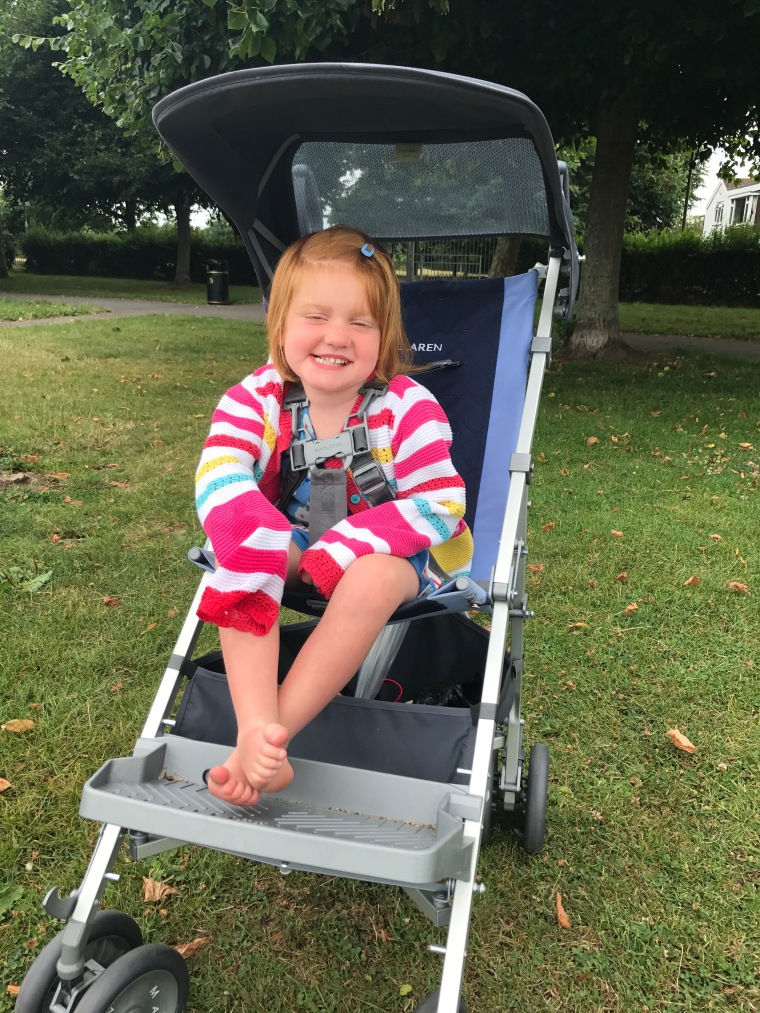 I’ve always been a big believer in the power of words. Today marks four years since I was told that my nine month old baby was “failing to thrive”.

I was failing her and so she wasn’t thriving. I went home and I sobbed. It had been nine months of weekly weigh ins, weekly “why don’t you give her a bottle?”, weekly insisting that there was something wrong with my baby, they were wrong, she wouldn’t catch up. My wonderful health visitor was the only professional person who took me seriously and did her one year check early to start referrals to the specialists. The GP was the one to tell me my child was failing to thrive and he referred her to the growth paediatrician. The only referral that was successful. Every other service came back and said no. They would not help yet. My wonderful health visitor battled with them all until they accepted she needed their help.

Funnily enough, the growth paediatrician was the only positive aspect. She wasn’t failing, she was just small. But I sat in her office and begged her to check Tilly. My ‘failing’ baby had no reflexes and it was mentioned she may not walk. It was a very difficult time and another seven months before she saw any of the services she needed.
The word failure swam around in my mind for a long, long time. I took it personally. I had failed her. I was her main caregiver so it was my fault somehow. Maybe I didn’t interact with her enough? She was sick almost constantly so would stay upright and strapped to my chest to keep as much milk in as possible. Did I harm her by doing that? Should I have left her to scream in pain on the floor to work on her muscle tone?
Not only that, but they had described my baby as a failure. My perfect, wonderful baby. I was heartbroken.

Four years later, Tilly has profound learning difficulties, is officially classed as disabled and has uncontrolled epilepsy. Would I class her as failing to thrive?

My girl is a warrior. She’s never failed at anything. She’s fought tooth and nail to be the very best she can be no matter what has been thrown at her. She has low muscle tone and very flexible joints yet has learnt to walk multiple times and gets stronger every day. She has epilepsy that charges through her brain constantly yet still pushes on to learn new skills.

Tell me exactly what part of that is failing to thrive?

I hope that one day doctors will stop using such a hurtful and unneeded term. Use the word delayed. Delayed gives hope. Not yet, but one day. Failure is a cruel word to describe anyone. Words are powerful, use them wisely.

My girl is NOT failing to thrive. My girl is incredible.